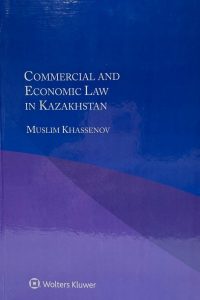 Khassenov Muslim Khanatovich, Assistant Professor of M.S. Narikbayev KAZGUU University , the author of the monograph “Commercial and Economic Law in Kazakhstan”, published by  international publishing house Walters Kluver (Netherlands) within the framework of  International Encyclopedia of Laws IEL (International Encyclopaedia of Laws), donated to M.S. Narikbayev  library stock  2 copies. It took 2 years to prepare it and 1 year to review it. The book is a reference and analytical publication that systematizes the issues of commercial and economic law of our country according to a single structure, which is followed by all other foreign authors in their national legal systems. This makes it possible to ensure the availability of information that reveals the features of domestic legislation for an international reader.

The encyclopedia is available in the Wolters Kluwer international database and, as a rule, is transferred to all the largest libraries in the world.

Wolters Kluwer publishing house is ranked 5th in the world in the Global 50 The World Ranking of the Publishing Industry 2020 and is in high demand among subscribers.

Bibliographic data of the book:

This is not the first book published in such a prestigious world publishing house.

In 2017, Khasenov M.Kh. published  a book on labor law in this publishing house together with professor Nurgalieva E.N. “Labor Law and Industrial Relations in Kazakhstan”.

Information about the author:

Doctor of Philosophy (PhD) with a degree in Jurisprudence, Master of Legal Sciences with a degree in International Law, Head of the Labor and Social Law Center, assistant professor at the University of KAZGUU named after M.S. Narikbayev, General Director of Novo Integro Consulting.

Mr. Khassenov has over 100 publications on legal issues, including monographs and textbooks on labor, trade union, commercial and economic law in Russian and English.

He is a consultant in a number of projects of the International Labor Organization, the World Bank, the United Nations Development Program, ministries and departments of Kazakhstan.

The following text will be sent to our editors: